“Happiness is a state of mind, a way of being and seeing life”

The buddhist community Thubten Dhargye Ling has as its objective that all beings can live as one large family, in peace and harmony.

In general all conscious beings want happiness and to avoid suffering. If we ask ourselves about what we need to do to find happiness we soon discover that material possessions are not sufficient. Notwithstanding, there are ways to find happiness, through study and development of a kind heart, love and compassion. This is the Buddha’s principal message.

We simply share the Buddha’s Dharma with all those who are interested in learning more about Buddhism and meditation. Our only wish is to promote the study, practice and spread of the Buddha’s teachings in accordance the Buddhist Mahayana tradition of the Tibetan Gelugpa school.

He was recognized, in accordance with the Tibetan tradition, as the reincarnation of his predecessor, the XIII Dalai Lama, at the age of two years.

At the age of four he was taken to Lhasa and officially recognized as the XIV Dali Lama. His Holiness is the incarnation of Avalokitesvara, the Buddha of compassion.

From that moment he received an education that covered an extensive and sophisticated range of subjects from religion, metaphysics, logic and the wide ranging views of the different philosophical schools.

Since his first visit to the West in 1973 His Holiness’s reputation as a learned scholar, and a man of peace, has grown ceaselessly. In recent years a large number of prestigious universities and institutions worldwide have awarded him with Peace Prizes, and honorary Doctorate Degrees, in recognition of His Holiness’s written works on Buddhist philosophy and his leadership in matters of freedom, peace and non-violence.

Hi Holiness frequently says, “I am a simple Buddhist monk – nothing more, nothing less”. He has continued to live the life of a Buddhist monk and lives in a small complex in Dharamsala, India. 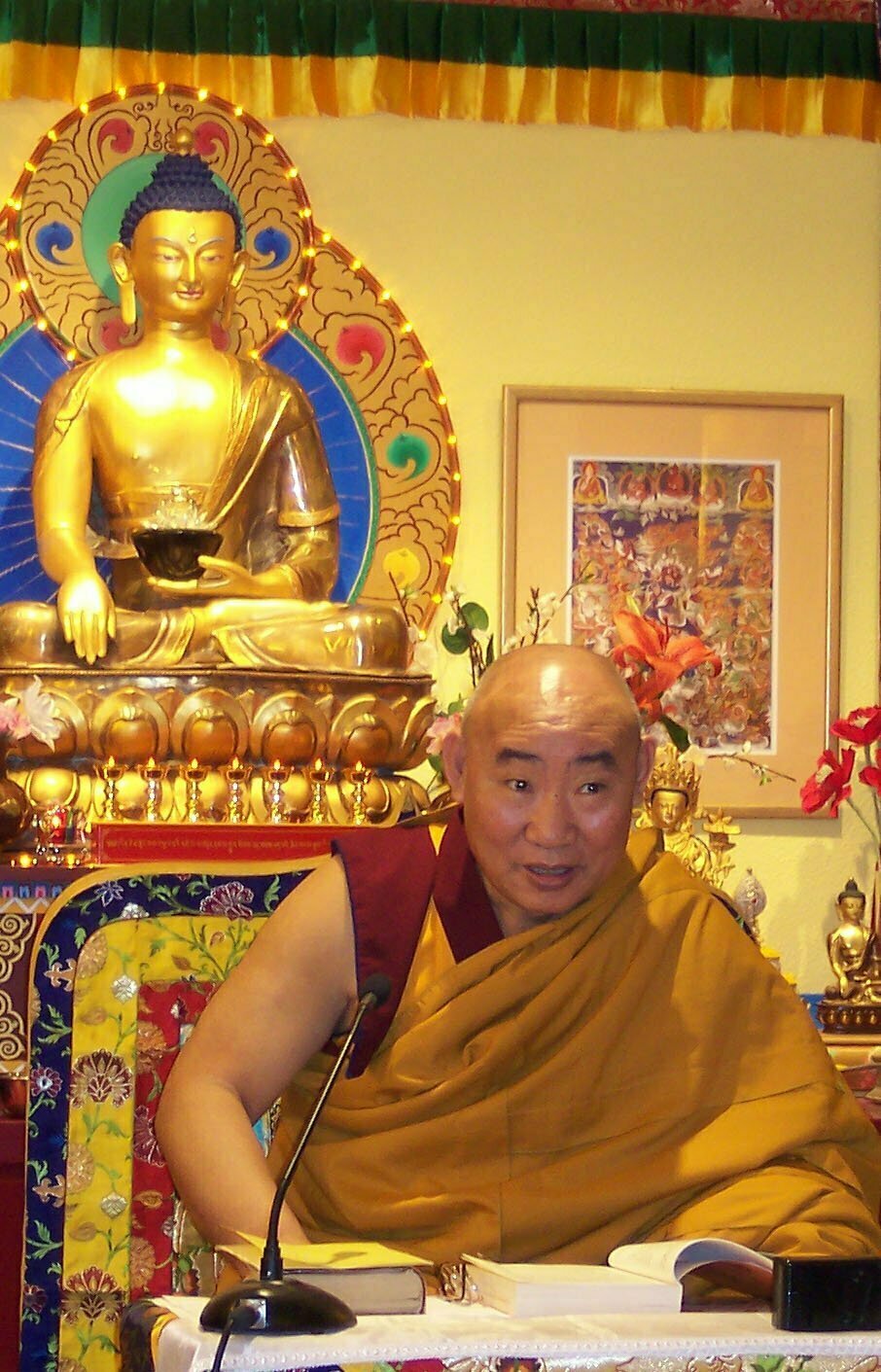 The very venerable Lama Geshe Tserring Palden was born in Tibet in 1944, in the village of Rengko, in the region of Kham. He was the youngest of 6 brothers from a family with deep religious tradition. When he was only 10 years old, and under the guidance of his brother Geshe Tsewang Phuntsok, he entered into Dhargye Monastery. Later he moved to the prestigious Sera Monastery in Lhasa, continuing his studies until the people of Lhasa rose up against the Chinese invasion in 1959.

In March of that year, under the care of his teachers Gyume Khensur Geshe Ogyen Tseten Rinpoché, Khensur Khangyurwa Geshe Lobsang Thubten Rinpoché and Geshe Tsewang Phuntsok, he formed part of the first group of monks to follow His Holiness the Dalai Lama into exile. The teenage Tsering Palden took leave of Tíbet and after a tortuous 3 month journey, during which they crossed the Himalayas on foot, while being pursued by the Chinese army, he reached India where he received asylum. During the next 12 years he lived in the refugee camps of Asam and Buxa, continuing his monastic studies despite the harsh conditions they had to endure.

He attained the title of Geshe Larampa, the highest honour within the studies of Buddhist philosophy, later receiving training in tantric studies at Gyume Monastery. During all these years he he received teachings from His Holiness the XIV Dalai Lama, as well as His Holiness’s teachers, Kyabje Ling Rimpoché y Trijang Rinpoché.

In 1997 he started to teach in the West, living first in Tahiti and later in France. In the year 2000 he moved his residence to Spain and, in 2003, by request of his Spanish disciples, he established in Madrid the Buddhist Community THUBTEN DHARGYE LING. In 2012, following a similar request from a group of pupils from Mallorca, he established the Buddhist Community Lama Tsongkhapa. 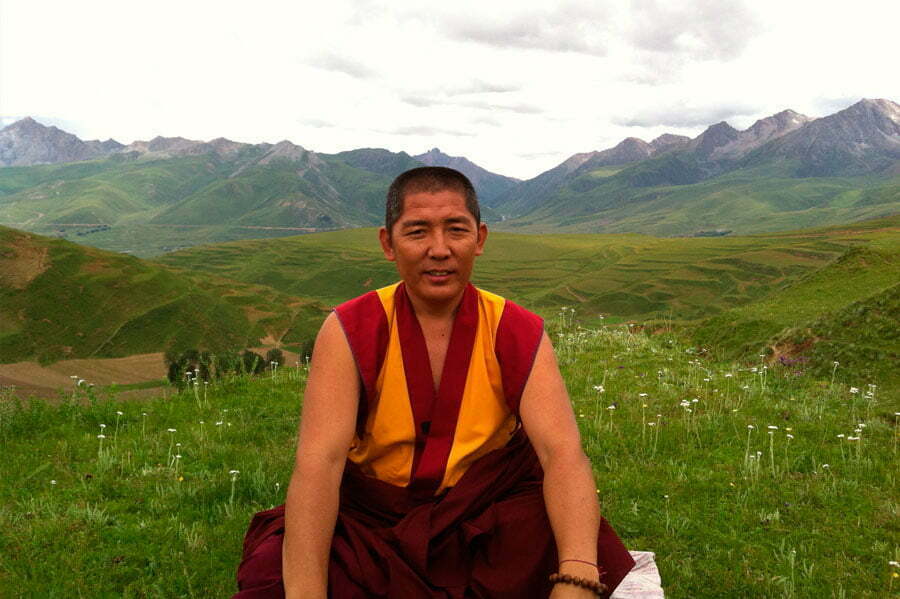 Geshe Ngawang Losel was born in 1971 in the area of Manaly in India. Son of Tibetan refugees he is the third of six brothers. At the age of 8 he entered Sera Je Monastery in the South of India, under the guidance of this uncle the Venerable Lama Geshe Tsering Palden. He followed all the traditional monastic studies until he attained the title of Geshe in 2004.

Between 2001 and 2004 he held the post of Administrator of Sera Je Monastery, the largest of all the monasteries of the Gelugpa tradition.

At the end of 2004 the Venerable Lama Geshe Tsering Palden asked him to move to Spain to help with the spiritual teachings of Buddhist Community THUBTEN DHARGYE LING. In 2012, together with his Master, he founded in Palma in Mallorca the Buddhist Community Lama TsongKhapa.

The Buddhist Community Thubten Dhargye Ling is the generous response of the Venerable Geshe Tsering Palden to the petition for teachings, and guidance in the path by his students. It has as its aim to promote the spread, study and practice of the teachings of Buddha according the Mahayana Buddhist tradition of the Tibetan gelugpa school.

Tierra de Budas is the Retreat Center of

Your ticket for the: About us